World Day of Prayer for Wales

Heads will be bowed in prayer for Wales at all Christian churches around the world on Friday for World Day of Prayer.

This special day is always on the first Friday of March and the focus this year is on the United Kingdom.

“We will be praying for three Welsh people and the people of Wales,” said Reverend Helen Ferguson, who will be conducting the service.

Three women in Wales will be featured, with their stories of hunger, abuse and disability and of how God had other plans for them.

This fits the 2022 theme of ‘I know the plans I have for you,’ which is taken from a bible passage from the book of Jeremiah 29:11 to the Jewish people in captivity in Babylon.

After the service, there will be Welsh cakes, home-made by Liz Ryder.

“They’re a bit like a scone, cooked on the grill, covered with castor sugar and with currants,” said Liz.

The cakes are a precious part of Welsh heritage, which was suppressed by the English.

In 1284 the crown of England annexed Wales and in 1543 King Henry VIII incorporated Wales into his realm. This meant that Welsh law was replaced by English law.

It wasn’t until 2007 that Wales gained its own government, with certain functions devolved to Cardiff from the Westminster parliament.

The United Kingdom only recognised Welsh as an official language in 2011, after years of oppression.

Liz’s grandfather, Graham Keirle, was from Llanbradach in South Wales, north xof Cardiff and he was not allowed to speak his Gaelic Welsh language at school. If he did, he had to wear a piece of slate around his neck with English words written on it in chalk.

This was the oppressive Welsh Not, or Welsh Note, which was a way to force Welsh children to speak English at school. A stick or plaque was given to any child heard speaking Welsh during school hours, which was handed on to the next child who uttered Welsh words.

At the end of the school day, the child left with the Welsh Not was punished.

Graham went on to work in a coal mine in Llanbradach. He met Liz’s grandmother, Evelyn, when they were both in the army in the late 1940s, after the war.

In 1952, Graham and Evelyn travelled to Australia as ‘ten-pound Poms’ as unmarried individuals because they would have had to wait longer for their fares if they had been married.

Mark Curtis will share the spirit of Wales by performing Welsh hymns at the World Day of Prayer.

Mark’s maternal grandmother, Norma Maywyn, was born in Broken Hill but her grandmother came out from Wales.

“The Welsh followed Jesus Christ and followed His principles and this had a huge impact.”

The rate of children born out of wedlock dropped by 44 per cent and crime rates plummeted at this time, according to Mark.

“A judge was given a white glove, which was the symbol for no cases in court that day,” he said.

Yesterday, March 1, was Saint David’s Day, the Patron Saint of Wales, and all are welcome to pray for Wales at the World Day of Prayer at 7pm on Friday at Saint Peter’s Church in Lane Street. The service is ecumenical and there will be readings by members of various churches.

“It’s good to know in this little pocket of Broken Hill that we’re joined together around the world,” said Mark.

“God always has a plan for us and it’s always better than you expect,” added Reverend Helen. 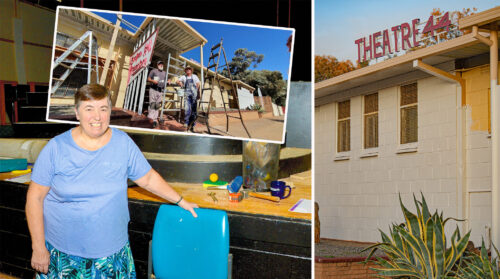