Around 175 past players, present players and officials turned up for the West Broken Hill Football Club’s past players reunion on Sunday.

“The lunch was an outstanding success, and for me, the highlight of the day was Vince Gauci receiving the Top Robin Award,” West Past Players and Officials Association Chairman David Sedunary said.

Ray Burkett and Peter Pascoe greeted people when the event kicked off at 11am for lunch.

Players from the 1962 team who turned out for the event were Vince Gauci, Ross Turner, Kevin Fobister, Stan Brooks, Don Carr, Ray Sayers and Graham Bennetts.

The MC on the day was John Lynch. He and Australian Cricketer Wayne Phillips kept the crowd laughing for the afternoon.

People travelled from as far as South Australia, Queensland, Victoria and Sydney to participate in the event.

Mr Sedunary caught up with an old friend Rex Lawn who had travelled from Queensland for lunch. 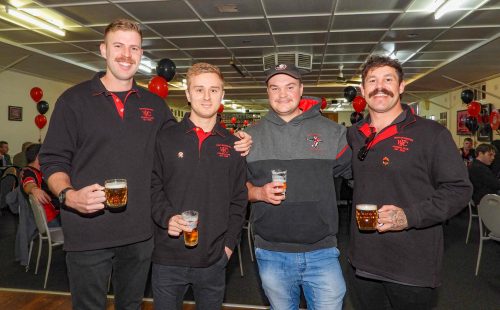 The men were good mates in their youth and hadn’t seen each other for 51 years.

Younger West Broken Hill Club members Heath Harris, Riley McInnes, Max Everuss, and Liam King came to the lunch to show their support for the Club and the 1962 team members.

“The purpose of this event is for people to come along, have a good time and put something back into the Club,” Mr Sedunary said.

There was an auction in the afternoon that included the Wayne Williams’ original pencil drawing and a handmade barrel by a West footballer, Barry Balman.

The auction raised around $2000 for the Club, explained Mr Sedunary.

“I’d like to thank all our supporters for their generosity and our sponsors for helping us with this event. There were about forty sponsors, and their support helped keep the event’s costs down and made the lunch affordable for people who wanted to attend,” Mr Sedunary said.

The Club hopes to have more of these events in the future.