Mr Gilby who has played his entire senior career at the Magpies between As and Bs said that the club has always been good to him.

“There was never any doubt in my mind that I was going to continue to play for this club. They have been very good to me over the years, they have looked after me in more ways than one.”

Mr Gilby who First ran onto the senior field in 2008 when he was 16, said that it has been a long slow journey of improvement, helped along by a few important mentors.

“I spent a fair chunk of the career in B grade and there were no hard feelings, but at that time I probably wasn’t as committed and as skilful as the players in front of me.”

“It wasn’t an overnight thing, but I just chipped away at it and then I got the opportunity from Jarrod Paul our coach in 2020, and he has been instrumental in turning me from a mediocre football player to someone that I think now deserves to be on the field.”

“Gavin Blows who passed away a few years back, he was instrumental in my football and someone I really looked up to”

Mr Gilby said that current coach Greg Wellington has also done an incredible job at helping the team see the mental side of the game and in two years has been able to turn the side around from zero wins to currently being second spot after round 5.

“He is one of those guys that can see the forest through the trees and say that it is just a mental block that you have created yourself and you deserve to be there, credit to him.”

Mr Gilby said that there are a lot of exciting young players in the club, and that it has been great to watch how the game changes over the years.

“The game has definitely become a lot quicker, coming from early 2000s to now, the skill and the agility of players is probably the biggest change.”

“Kids are no longer little muscly nuggets of players; they are six foot plus and very agile. I have had to climatise to that.”

Mr Gilby said that as Captain of the club he hopes to offer the same support that will allow some of the younger players to also reach 200+ club games.

“To come from a boy playing his first game running around with men, to now being that person out there, it’s good to see the kids come through now and to try and nurture them in the same way.”

“There are a lot of talented kids and I think all we can do is impart a bit of wisdom onto them,” he said.

“If they can continue, it will be a very rewarding time for them.”

Mr Gilby said that the game on Saturday may not go their way, but the team will make sure that whatever happens, they do not take a backwards step.

“Momentum is the biggest thing, we just have to keep momentum, things on the weekend are not likely to go our way but mentally we have to continue to be better.” 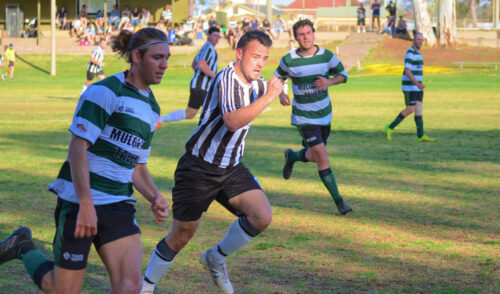