The winless run, that lasted 1360 days, ended in a convincing round one performance in the ANZAC day headliner at Jubilee Oval.

“It was good, a lot of things we’ve been building up on,” Central head coach Greg Wellington said.

“First win in three years. But we got North next week…we need to be on top of our game to be competitive.”

The Magpies won the toss and elected to kick away from the scoreboard. Central registered the game’s first point before West’s forward pressure resulted in a minor score.

Central hit back and scored the game’s first goal before adding another soon after.

Tough tackling led to players scrapping, with both teams showing passion and desire to fit the occasion.

They couldn’t make their good work count and wasted two opportunities in front of goal.

Central regained their hold on the match, eventually kicking another goal and making West pay for their missed chances.

Coach Wellington said he was pleased with his side’s centre clearances and transition game throughout the match.

“I think we were on top of those things,” he said. “Our transition was a bit rusty at times but at the end it got us over the line.”

After half-time, Central mounted on the pressure by getting an early goal.

Spectators got vocal and cheered on their respective teams, as both outfits displayed hard footy.

Central stretched their lead by converting another opportunity but West players put their bodies on the line to remain in the contest.

Tensions were high for the remainder of the game with players needing to be broken up by on-ground umpires.

“That to me is Broken Hill footy,” Coach Wellington said. “It’s personal; they get up in each other’s faces.

“There were scraps but I don’t think anyone went over the line.”

Central kicked a goal as the three-quarter time siren sounded, taking a 40-point buffer into the last change.

The teams came out in the fourth under lights. There wasn’t much to split the teams early in the quarter.

West finally made a goal mouth opportunity count, scoring their first major of the game after a breakaway attack and silky play.

The lead was too big to claw back and Central ran out winners. 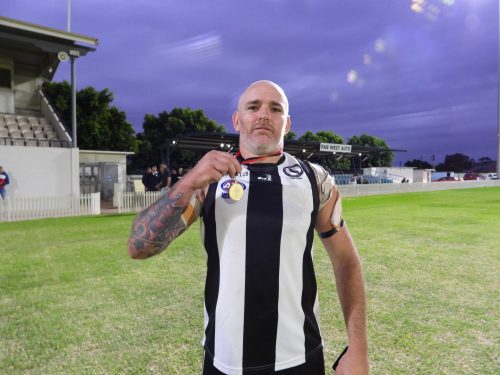 Central forward Mitchell Reberger was awarded The Richard Sandow medal in the postgame presentation for his performance.

“It is quite a privilege to part of the West and Central’s game today and I am honoured to received it,” Reberger said.

Reberger was happy with the team’s overall performance and said claiming the points early in the 2022 campaign was a major boost.

“It’s a good start to the season and it was what we were striving for in preseason,” he said.

“It’s come in round one which is perfect for us. The morale has come up and it’s a really good atmosphere at the moment.”

The magpies were all smiles at the end of the game and belted out their club song that may have echoed through Broken Hill.