“This is my first senior Grand Final,” Mutch explained, about playing for the Woodville West Torrens Eagles in SANFL title fight against Glenelg, tomorrow, Sunday October 3, at Adelaide Oval. A North Broken Hill junior, Kobe Mutch, will be looking to place his number alongside a multitude of Silver City Australian Rules Footballers across more than century that have enjoyed SANFL premiership success in Adelaide.

“This is my first senior Grand Final,” Mutch explained, about playing for the Woodville West Torrens Eagles in SANFL title fight against Glenelg, tomorrow, Sunday October 3, at Adelaide Oval.

“I played in a VFL Preliminary Final with Essendon in 2018.

“The last flag I played in was with the Wentworth Roos Under 16s.

“After playing in the seniors during the season, I qualified for the Colts team to play in the finals and we beat Irymple by three points.

“That side was pretty stacked as well, including current AFL listed player Jarrod Brander and Derek Eggmolesse-Smith.”

The SANFL Eagles defeated minor premiers, Glenelg, in a thriller on second semi-final day to gain direct entry to the 2021 SANFL Grand Final. They will meet the Bays again, as the Tigers defeated South Adelaide in the Preliminary final on AFL Grand Final eve.

Mutch was a strong contributor on second semi-final evening, continuing his consistent form across the second half of the season, winning 16 possessions, laying 10 tackles and kicking a goal.

“I played as a defensive-minded midfielder in the semi-final, but we’ve had one forced change so my role may be a bit different on Sunday,” Mutch continued.

“As a group we’re starting to play our best footy at the right time of the year.

“It is important not to play the game in your head too much before the ball is bounced.

“We have a captain’s run today (Saturday October 2) and the final preparations will be discussed there.

“Naturally, playing my first AFL game was special from an individual perspective, but this is the largest game of my career so far.”

Mutch is keen to etch his name alongside a number of greats of Broken Hill Football that have come to Adelaide and enjoyed premiership success.

South Broken Hill talent, Chris Duthy, was a member of Glenelg’s back-to-back successes in 1985 and 1986, while fellow South export, Steve Hywood, played on the half-back flank in the Bays 1973 thriller against North, after playing in Richmond Grand Final team of 1972.

A former West Broken Hill Robin and an original inductee into the South Australian Football Hall of Fame, Owens kicked 827 goals across a 177-game career that spanned more than a decade from 1924.

A 251-game key defender at the Double Blues, Colin Casey played in both the first Grand Final at Football Park in 1974, where Sturt defeated Glenelg, and in the famous ’76 flag where the crowd spilled onto the playing arena.

Distinct underdogs in that game, the Double Blues defeated the raging favourites, Port Adelaide, in front of an official crowd of 66,897, although the police estimated it was closer to 80,000.

Casey had already played A grade football with West’s before debuting with Sturt in 1971.

Starting with Woodville, the mercurial Peter Meuret moved across to West Adelaide, playing a role in the 1983 triumph against the Sturt.

Dual Magarey Medalist in 1926 and ’27, Bruce McGregor, was premiership captain of West Adelaide in the second of those seasons, where they defeated North Adelaide by a couple of goals to collect the Bloods’ first premiership since 1912.

“There was a great team spirit within the club that year.

“We had a lot of good players, but no-one was looking for personal glory.”

McGregor was among a cohort of Broken Hill players in the 1927 success, including half back Harry Lee, rover ‘Chilla’ Payne, wingman Harold Solomon, John Scanlon and utility ‘Sonna’ Stokes.

In Norwood’s flags in 1922 and 1925, Roy “Alec” Bent was a star goal-kicker, kicking three goals and being among the best players in the first and slotting through six goals in the second.

The legendary William “Tiger” Potts played in the 1923 success as well, rucking in three flags in four years for the men of the Parade, in a career that started in 1921 and continued for the next 47 years, the large majority from 1935 as head trainer.

Journeyman Jack Woollard played SA football at four clubs before World War I, along with West and East Perth in the west, captaining the Port Adelaide Magpies to success in 1910, where they became Champions of Australia, after winning against WAFL and VFL premiers, East Fremantle and Collingwood, to claim that crown.

This article was originally published on 2 October 2021. 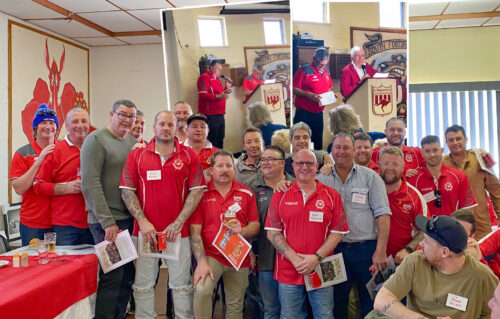