One hundred and sixty years ago this month, the explorer Alfred Howitt found the sole survivor of the Burke and Wills Expedition at Cooper Creek, and the sad fate of Burke and Wills was finally revealed. However, the news of the explorers’ demise would take another two months to reach Melbourne.

Unaware of the dramatic events unfolding at the Cooper, the expedition’s organisers, The Royal Society of Victoria, held a meeting at the Society’s Hall in Melbourne to celebrate the bravery of a young Barkandji man from Menindee, who Anglo-Australians called ‘Dick’. On 23 September 1861 the Governor of Victoria, Sir Henry Barkly, presented Dick with an engraved brass breastplate on a chain and five sovereigns in honour of his gallant conduct in saving the lives of two of the expedition’s members.

Dick was one of several Aboriginal people that guided the Burke and Wills Expedition through the colony of New South Wales, with Mr. Benton, Martin, Simon and Watpipa taking turns to lead the expedition through the mallee country from Balranald to the Darling. Upon returning to Menindee, Dick found a police trooper, Myles Lyons, had arrived from Swan Hill with urgent despatches for Burke. Accompanied by a saddler from Bendigo, Sandy MacPherson, the three men set off in pursuit of Burke, with Dick once more leading the way north.

It was now December 1860, the weather was hot, the men had limited provisions and water was scarce. As they ventured over the Queensland border into the Grey Range their horses died and the men became stranded. They were forced to drink their own urine to survive, before struggling back to the mosquito-infested waterhole at Torowotto Swamp. Too weak to continue, Dick hunted for food and then arranged for the Pantyikali people to supply them with nardoo cakes, birds, snakes and goannas.

In a final bid for salvation, Dick set off alone to walk 150 kilometres through the summer heat to Menindee to raise the alarm, leaving Lyons and MacPherson huddled under the shade of an old horse blanket. After travelling for eight days without food, Dick arrived at the Expedition’s camp in Menindee and collapsed. The Expedition’s surgeon, Dr Beckler recalled:

“I saw a native approaching our camp. I would certainly not have recognised him were it not for his clothing which led me to think it must be Dick. His previously full face was sunken, his tottering legs could hardly carry him, his feet were raw, his voice was hoarse and whispering. He was the shadow of a man. He laid himself at my feet and looked at me wistfully and soulfully.”

A rescue party was sent out to retrieve Lyons and MacPherson, and the artist, Dr. Becker, painted a watercolour of their saviour – ‘Dick the brave and gallant native guide’. The Expedition’s third-in-command, William Wright, “was very desirous that Dick should be rewarded in some manner and wished to purchase a medal for him”. The Royal Society of Victoria was aware that an Aboriginal woman from the Darling had been presented with a brass medal for saving the life of a white man, and so they arranged for a similar brass breastplate for Dick to be inscribed with the words:

“Presented to Dick by the Exploration Expedition, for assisting Trooper Lyons and Saddler McPherson, December, 1860.”

Unfortunately, the breastplate was mislaid while being taken from Melbourne to Menindee, but when it was eventually returned to the Royal Society of Victoria later in the year, they decided to invite Dick to Melbourne for a formal presentation. The Melbourne newspapers reported:

“On Monday afternoon, 23 September 1861, at the Hall of the Royal Society, His Excellency Sir Henry Barkly, in the presence of several gentlemen, presented ‘Dick’, the Aboriginal who materially assisted in rescuing Lyons and McPherson from the perils of the Australian interior, with a brass plate and chain and five sovereigns, as a reward for his gallant conduct on that occasion. His Excellency, in making the presentation, said: ‘Dick, I understand that this has been given to you by the Queen’s Government for rescuing Trooper Lyons and Saddler McPherson. Every blackfellow who sees you will let know what you received this for.’”

Dick returned to Menindee after his remarkable journey to the Victorian capital, and continued as an expedition guide, first for Alfred Howitt and then George Curlewis. However, after 1862, there is no further record of his movement. Dick’s digging stick was later presented to the Royal Society of Victoria as a souvenir.

The Royal Society of Victoria made three additional brass breastplates which were presented to Yandruwandha-Yawarrawarrka people at Cooper Creek. Two of these breastplates were found several years ago.

Now, on the 160th anniversary of this remarkable story, the Burke and Wills Historical Society would like to know more about the forgotten tale of Dick’s courageous act, and maybe find out what became of his breastplate and digging stick. If you can shed any light on this mystery, the B&WHS would love to hear from you. You can contact them at [email protected] and all responses will be gratefully received and answered. With less than two weeks to go until the doors are flung open, Bash organisers say they are thrilled to once again partner with the regional arts development organisation to give visitors the opportunity to connect with the desert-inspired arts and crafts of the western region.
. 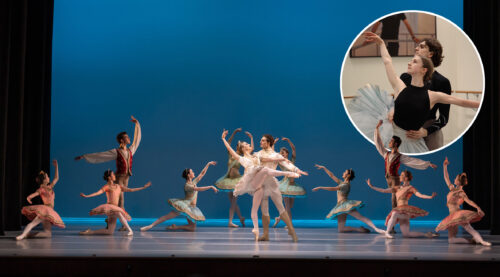 The Australian Ballet is in Broken Hill for one performance on Saturday, August 13 to showcase their skills and give locals a taste of professional ballet.
. In a welcome boost to the upcoming Broken Heel Festival, the NSW Government's Regional Events Acceleration Fund has committed $110,266 to support pop-up accommodation on Jubilee during the event.
.